Christine Holgate’s forced resignation came out of the blue for many people, especially as she seemed to be turning things around for the Government Business Enterprise. But, like most things, there’s more to the story than meets the eye. Ronni Salt (@RonniSalt) did some great investigative work on twitter and her thread is reproduced in full below.

Was Christine Holgate the victim of a Scott Morrison special – the stitch-up? Ms Holgate was recruited to #AustraliaPost by the Turnbull government in October 2017 and immediately set the standard by accepting a wage at less than half of her predecessor Ahmed Fahour.

When Mr Fahour last represented AusPost, he & his chairman John Stanhope had fought to conceal Mr Fahour’s full remuneration from the Australian public. It was subsequently revealed Mr Fahour received $6.8M. And his bonus incentives were $4M. That’s 800 Cartier watches.

At the time much was made of the waste & expense during Mr Fahour’s reign at AusPost, but when Ms Holgate arrived, things seemed to settle down – publicity wise. At least to the great Aust public. After her appointment points, there was only moderate media mention of Ms Holgate.

Media articles mentioning Ms Holgate personally from Nov 2017 to Feb 2020 were scattered & appeared to focus mainly on the operations of Aust Post. Many of these appear to be generated* from Aust Post itself trying to rationalise the changes made in services. (*corporate comms).

However back in 2014, the Abbott govt commissioned the Liberal party’s old favourite Boston Consulting Group to conduct a review of Australia Post. Naturally, the BCG review found this wholly government owned service was a terrible waste of money – https://www.cwu.org.au/file/3889/I/CWU_Brief_FINAL_16_July.pdf

The reason for this endless government money wasting was to set the agenda for privatisation of Australia Post. And it’s important in any story – especially when you’re trying to sell the story to the Australian public – to lay down the crumbs for the narrative.

Privatising AusPost’s unprofitable letters section & rural service has been so much on the federal Lib government’s mind that in 2019, yet another review was called for. Naturally Boston Consulting Group won this contract as well, because you need to pay for the opinion you want.

Prior to this however, Ms Holgate had been doing something very unfortunate in her 2 years at the helm – she’d started to turn the fortunes of AusPost around. Ms Holgate commissioned a report in 2018 from PwC that highlighted areas of loss & how AusPost could rationalise.

And she listened. A highly respected corporate operator, Ms Holgate also listened to the local post office operators & the postal workers. But the federal govt has costly Community Service Obligations to their 2850 Postal Franchisees. They didn’t want listening. At all. 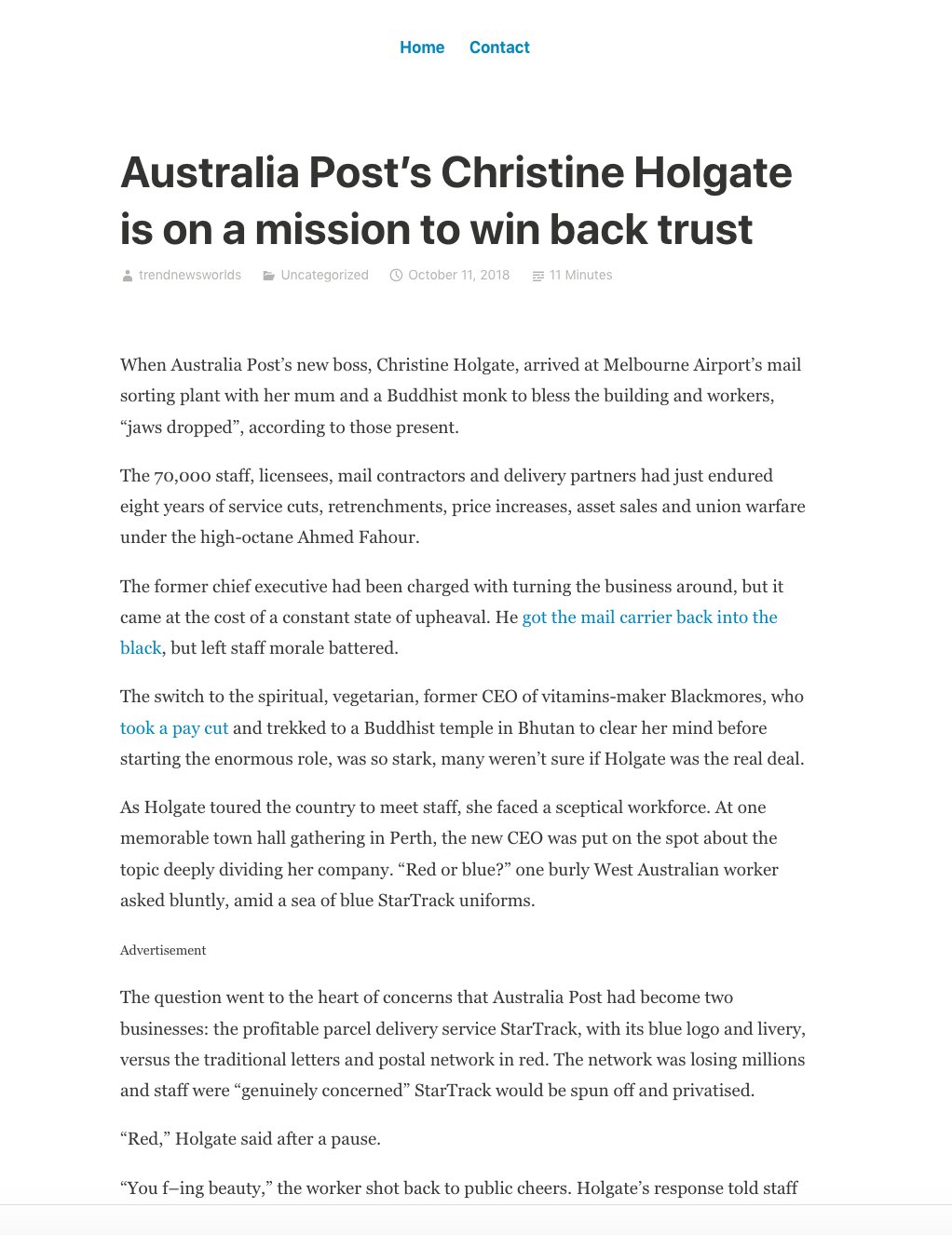 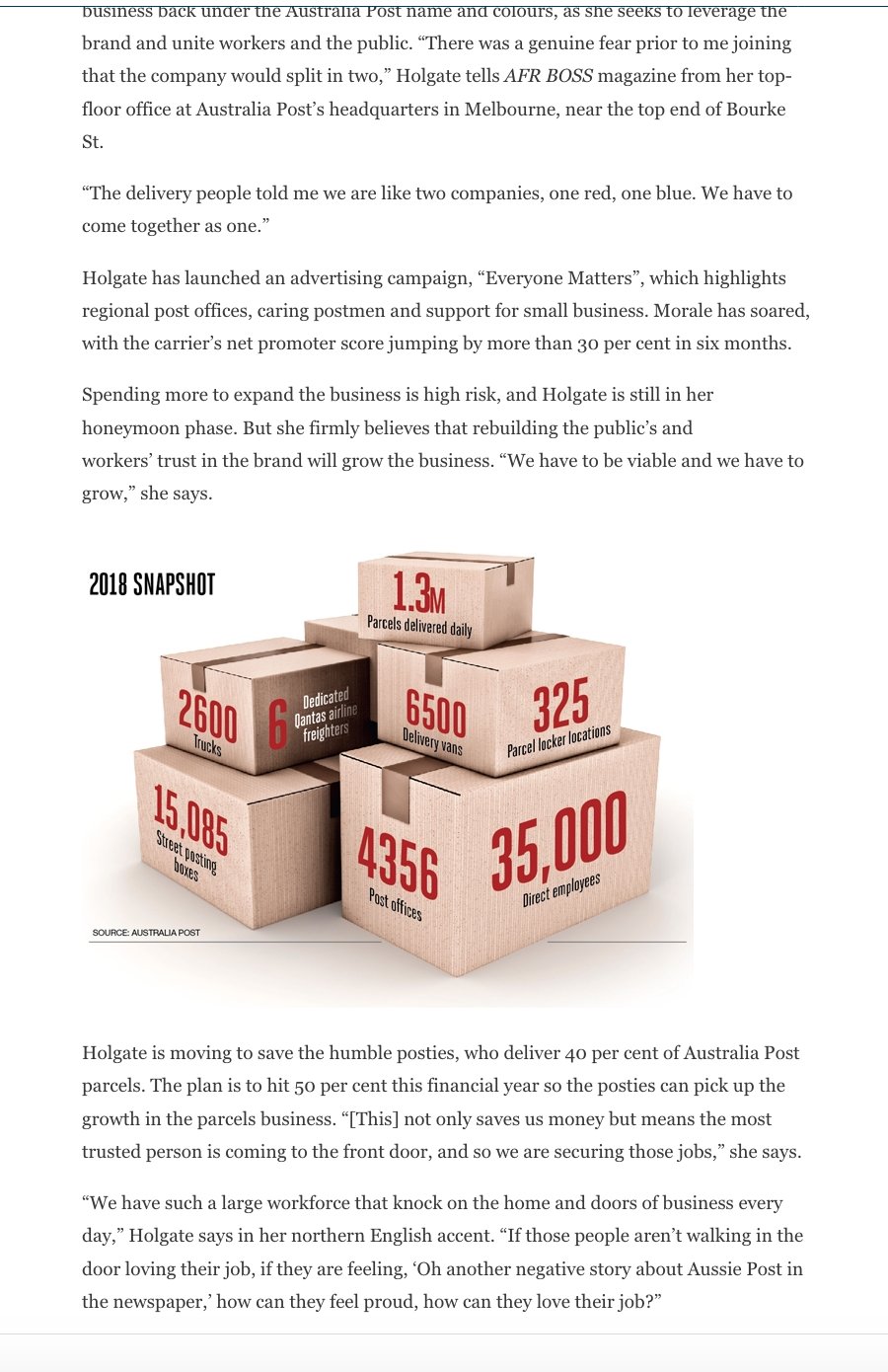 The parcel delivery section was posting record profits and as AusPost hurtled into a covid world in 2020 – those parcel profits became even larger. BCG’s 2019 commissioned report was delivered to the Morrison govt in Feb 2020, just prior to the new covid world. Timing.

The new BCG review outlined how sections of Aust Post, particularly it’s letter & international letter service, were still bleeding money. Now this was what the Morrison govt wanted to hear, after all they paid $1.9 million for it.

Governments need reviews to help them push their agendas. When in doubt, ask an outside expert, especially one that will tell you what you’re already thinking. And on top of all the other complicated factors needed to bring the public along with them, govts also need the media

I mention this, because a funny thing happened dear reader. Sometime in April/March this year, a slow steady creep of highly personal stories began to appear in the media about Christine Holgate.

At one stage the Daily Mail (the PMO’s favourite trash dumping ground) was running articles twice a week about Ms Holgate’s horrors. Suddenly Christine Holgate was everywhere. And she could do nothing right. 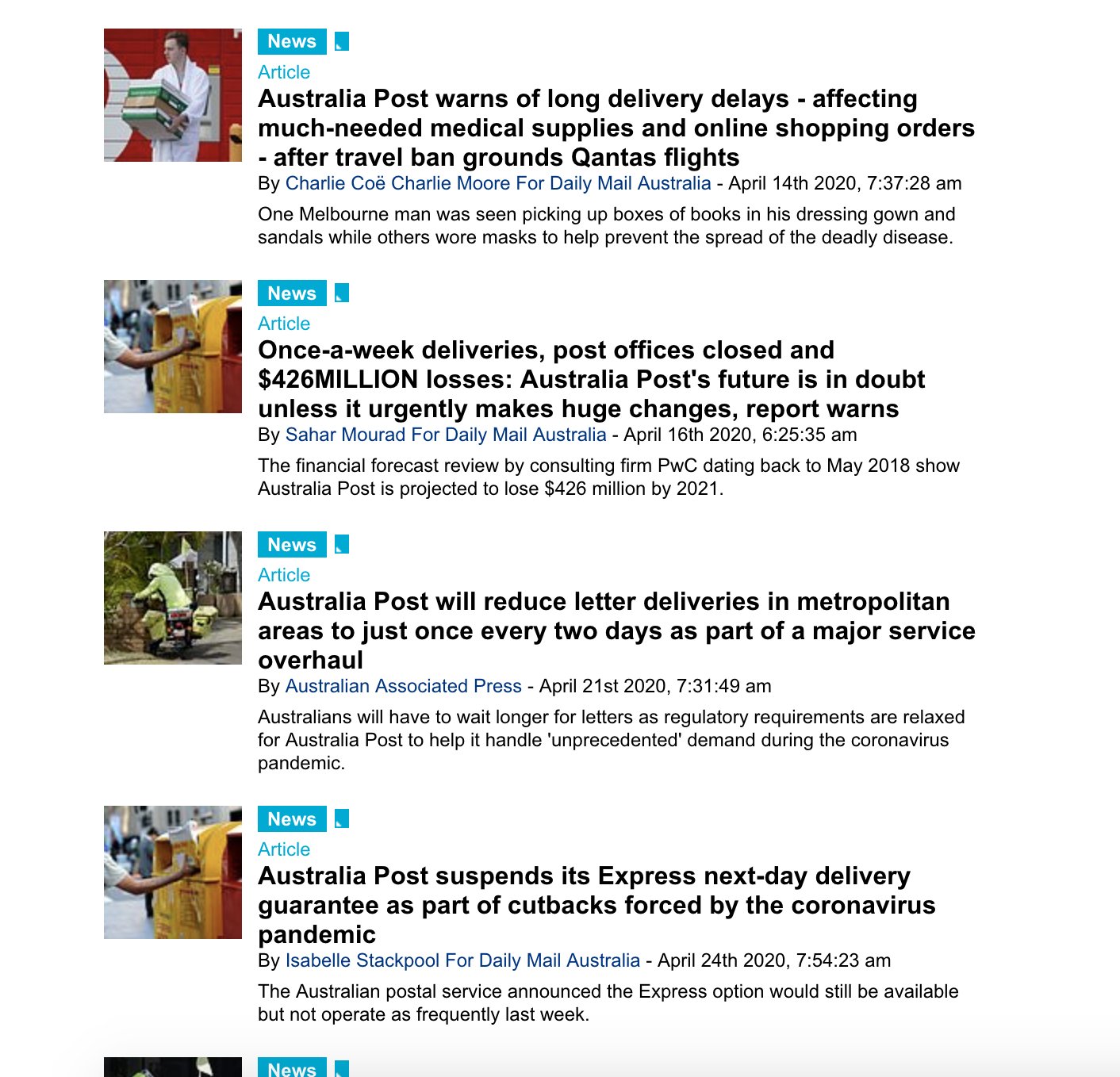 Emma Husar will attest that all the bait-the-punters signs of media spin were there: a glamourous woman seemingly spending far too much public money. Ms Holgate spent money on pot plants!!, money on group thinks!!, advisers & bonuses!! (All the usual things CEOs everywhere do)

The media stories dribbled out regularly. Always highly personalised, always slanted against Ms Holgate & always focused on the “waste of money.” Remember when we said you had to lay down the crumbs of a narrative?

Well if Ms Holgate had been half as cunning as the coordinated forces against her, she might have seen it coming. Certainly it seems at Senate Estimates last month, everybody on both sides of parliament knew it was coming. The stitch up was already on.

Just observe how Liberal Sen Jane Hume suddenly becomes deeply distracted by her phone at Senate Estimates just before Labor’s Sen Kitching opens her line of questioning. Distracted for many minutes, Sen Hume never looks up at all as the money shot is lobbed at Ms Holgate. 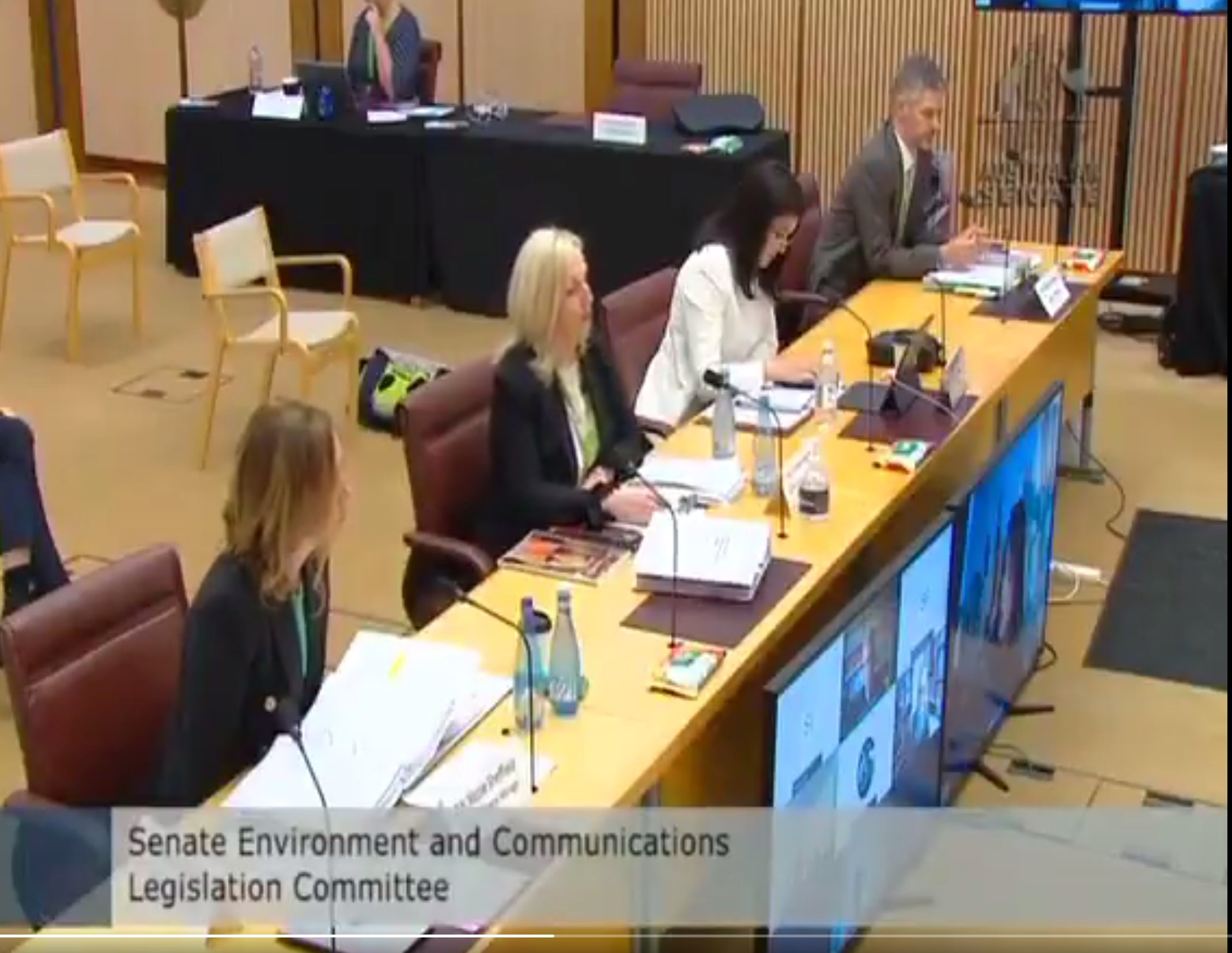 Scott Morrison’s office certainly knew it was coming. That’s because they had been laying the ground work for all the nasty leaks Or had they? Was there another disaffected force at work, playing their own pay back and leaking to Morrison’s office as well?

When Morrison was briefed on the BCG review in Feb this year, his advisers told him the board also should be reviewed. But allegedly, Scott Morrison would not countenance the removal of his own appointments. Bad for the image.
Ms Holgate was a Turnbull appointment. She was standing steady against the push toward privatisation. And she was turning AusPost’s fortunes around against the narrative. She was an irresistible target.

Ms Holgate had one other quality she didn’t know she had either – she was a fabulous distraction. In Ms Holgate, Morrison had found somebody to parade in front of the growing mob shouting ever more loudly about government corruption. He could be seen to be *doing something* !

Indeed Scott Morrison already knew the board of AusPost had pre-approved the CEO’s spending. The board had approved a budget for Ms Holgate to use at her discretion. But Morrison’s comms team could easily cover that nasty fact up in their “accidental leaks” to the media.

So Scott Morrison stood in parliament and thumped his chest in the same month he ignored his govt spending $30M on a $3M property. Of course the AusPost board and chair knew all of this was coming too. It’s why they refused to appear at Senate Estimates.
The chair of AusPost, Lucio Di Bartolomeo has some connected history with Christine Holgate. Entirely coincidentally, he sat on the board of the Downer Group when Michael Harding was chair & Di Bartolomeo exited. Michael Harding is Christine Holgate’s husband.

So the AusPost board was nowhere to be seen as Scott Morrison hammed it up and acted his pants off over the mediocre saga of $20K corporate bonuses. Like terriers with a coveted bone, some of the media were beside themselves to publish their “exclusive leaks”.

Side note: Morrison controls every iota of his image. It’s how he stays in power. In that SMH article (above) we’re told members of Morrison’s staff backgrounded on him without “Morrison knowing.” They wouldn’t have a job on Monday if they had. Like everything else, the leak is fake.

The hypocrisy from Morrison over the Christine Holgate non-issue was laughable. But once Morrison’s narratives have been helpfully and expertly set up in the media and in the public domain – the truth seeking journalists have to play catch-up.

The Morrison-flamed furore over Christine Holgate is pure classic Morrison politics Find a subject that’s middle-Australia popular Yell loudly Play-act the required emotion Announce the “solution” Then move on quickly while the truth bubbles up behind him. (and keep moving).

The problem with this performance theatre for the masses to achieve government agendas, is that it ruins the lives of good people. Not many people know that Christine Holgate has volunteered to continue helping those local AusPost franchisees. Of her own volition.

They’re the same franchisees who sent in $5 notes to cover the cost of the watches – a humble gesture to a manufactured controversy. The same franchisees the Morrison govt was looking at billions of dollars to bail out in future rationalisations. The ones Holgate protected.

And yet while some in AusPost mourn the assassination of a great executive and a decent person – the Morrison caravan has moved on. Another fix has been had. Another media manipulation done & dusted. The steps to privatising AusPost’s pesky loss-making sections are now easier.

In Judeo-Christian scripture, God ordained priests who performed rituals by sending a goat into the wilderness to carry away the sins of others. In Christine Holgate, Scott Morrison found his sacrificial goat The sins that remain however, will be a lot harder for him to escape.